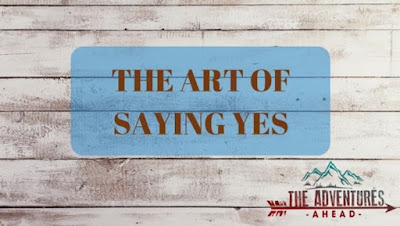 When I first read it, I thought “That seems kind of silly.” Yet the longer this thought has been in the back of my head, the less silly it becomes and the more intriguing it is. How different would your life look right now if you’d have simply said “Yes” more? Would you have a completely different job? Be married? Be dating? Live in a different state or even country?

I know that there are times we must say no, I myself often have to! I’m not telling you that you should say yes to every single question asked you throughout your entire life.
But I want to challenge myself.  Maybe to say yes to every single thing asked me for an entire day. I think in the near future I’ll do that, and then record my results here.

How often do you say yes to you?

I often times say no to myself, and that’s probably a good thing concerning a piece of cake or expensive boots. Quite frankly sometimes it’s exhausting to have so much self control. For instance, I got my hair cut this weekend! I took a total of six inches off, so it’s not like I went to a pixie cut, but it’s a pretty big adjustment for someone who’s had hair down to her waist for 2 years. Though it may sound silly, it was not easy making the final decision to cut it.

I really despise making decisions. Big or little, I overthink it and generally give myself a headache. But you know what? I’m actually starting to slowly get better.

“What if I cut my hair? Would it look good? Would people like it? Would I regret it? Should I spend the money?” I found myself freaking out about it, so I just said yes. I just did it, I asked myself, “What’s the worse that could happen?” and went for it.

On a more serious note, in August I took a position at a camp I’d never been to. I didn’t know a single soul there. It was honestly the first time I really did something all on my own. All of my previous endeavors someone I knew had done them before me. I knew what to expect.
But this time I was all on my own.

It was big and it was scary, and I could have just said no and played my life on the safe side, but where’s the adventure in that?

Instead of saying no, I simply said yes.

It did end up being quite intimidating: my stomach hurt for the first week I was there because I was so stressed out trying to learn everything and make good first impressions. However, as the days and weeks passed, I became adjusted and able to relax. The months then flew by and it was one of the best decisions I’ve made. I enjoyed my time at camp: waking up everyday looking forward to going to work is an amazing feeling! In the end, I’m so very glad I didn’t play it safe.

When I find that I have a difficult decision ahead of me, I try to breath and imagine, “If I say yes, what’s the worst that could really happen?” If the result isn’t catastrophic, I generally go for it.
Do you have a big decision coming up? I would encourage you to say “yes” and see what happens!

Are you stuck in a rut, a boring life routine? Maybe seek out a decision to make. Change things up, that job you’ve always wanted? Go apply! Dream vacation? Put away a little money each paycheck! Always wanted to dye your hair? Go to the store and buy a box of color!

You got this. Just go for it. You never know, simply saying “yes” could be the best decision you ever make.

That’s what life’s all about in my opinion: jumping in, trusting God, and seeing what happens.

Grace is a young blogger, camp counselor, and adventurer from Southern Michigan.  She's passionate about horses, writing, tacos, camp, Jesus, and Jeeps.
Check out her blog @ theadventuresahead.com.
Posted by Taran Wanderer at 6:00 AM